Scientific inquiry was born from the undefined human need to understand nature. In the process of coming to understand the human body, art and science were combined in fascinating visual studies of the human anatomy (ref. 1).

Art has always been a means of expressing and commenting on the world around us. During the Italian Renaissance, mathematical approaches were used to examine issues of perspective and relations between objects (ref. 2, 3). Art has been used to analyze science, and science has been used in art to provide techniques for transforming the two-dimensional canvas into a three-dimensional world.

Over the years, science developed into separate branches, some more visual than others. In recent years, it became possible to present visual scientific works from the fields of chemistry, biology and mathematics as pure art, and more and more scientists dared to take one more step forward by adding a final artistic interpretation to their works, thereby moving their creation from a conception of science into the world of art (ref. 4, 5, 6).

Science through art rather than art through science

While scientists were taking their first steps into the realm of art, only a few artists took the opportunity to touch on scientific issues. M. C. Escher dealt with mathematical subjects—symmetry, infinity, and relativity—using art as a tool for visualizing science (ref. 7, 8). Salvador Dalí, one of the most important surrealist painters, was strongly influenced by Albert Einstein’s new theories of time and space; this influence resulted in series of works: the melting clocks, the atoms, and more (ref. 9, 10).

In the past four years, I have decided to take up the challenge and focus my art mainly on the interpretation of scientific phenomena through the pure use of brushes and paint on canvas. No photographs or real images were used in the paintings; they are based merely on a subjective artistic insight into science.

Ten of the works on “science through art” are shown here.

Convergence, oil on canvas
Is there a way to visualize convergence? The next painting attempts to do just that. 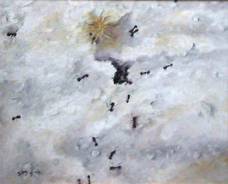 Rows of ants entering a hole in the ground. The distance between ants rapidly decreases as they come closer to their queen.

The inaccessible philosophical place of the queen represents the limit. 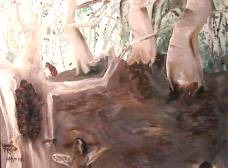 Divergence was born from the search for a pattern in nature that describes a rapid increase in distance.

Bees around their nest. The distance between bees rapidly increases during the search for food.

Fractals have become one of the most visual aspects of modern mathematics (ref. 11). The repetition of patterns in fractals provides an endless source of beautiful computer illustrations. The next painting is an attempt to use fractals to depict birth.

Pregnancy as a Fractal, oil on canvas
Birth, the ultimate pattern, was portrayed again and again inside a closed womb. 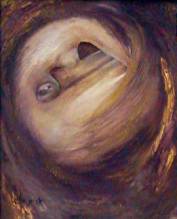 A womb holding a pregnant figure. A repeated fractal pattern.

Degrees of Freedom, pencil and oil on canvas

Degrees of freedom, a term widely used in science, could have been visualized in many ways.

The relationship between voice and air is used here to demonstrate different harmonic motions in the air, rather than the voice. 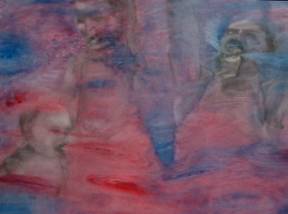 The unpredictable impact of human voices on air.

A Black Hole, oil on canvas

The subject of the human womb is used here again to describe a black hole as the center of a force that absorbs matter. Music, or rather information, was chosen here as the matter. 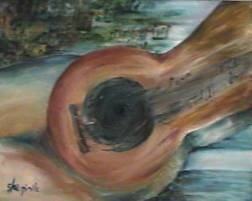 A black hole in the center of a guitar-shaped female figure. Musical notes sucked into the hole represent matter.

A Wrinkle in Time, oil on canvas

The theory that time is the only dimension and our local space developed due to a wrinkle in time inspired me to put it on canvas. The rapid changes occurring during sunset led me choose that time of day as an appropriate representation of time. 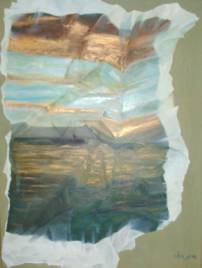 First, there was time…. Time, represented in this surrealistic Zanzibar sunset, is as folded as a wrinkled piece of paper.

Motion has long occupied the minds of painters. Impressionists tried to seize moments of breeze in nature to create the feeling of motion in the air.

Can we take a step forward? Can motion be split into two dimensions?

By breaking the face into slices, I attempted to create the first dimension of motion, and by changing the personality of the face in each slice, I made it speed up along the time axis. 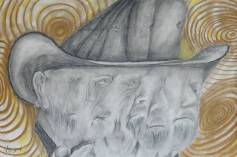 Motion in two dimensions. The actual movement of the face and the personality change.

Atom shells can be considered the most obscure notion in the abstract world of science.

The endless road in the sky creates an infinite stage for seeds of atoms: a nucleus in the center orbited by cloudy electrons. 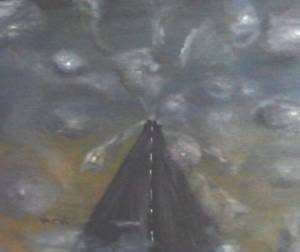 Electrons orbiting the atoms in a cloudy shape.

The last two paintings could have been presented in any field.

The issue here was the subjective impact of color, shape, or smell, not always relevant in experimental work, on scientific interpretation.

The protein ubiquitin, was colored in two conventional ways for different scientific reasons. To demonstrate a possible impact of color on interpretation, I used the blue and red colored ubiquitin for a study of muscles, while the green and blue ubiquitin was given an arbitrary sea life interpretation.

Ubiquitin—Skull, pencil and oil on canvas 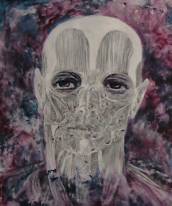 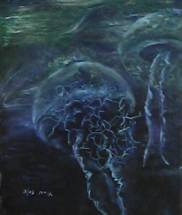 These works were presented at scientific conferences and in art exhibitions.

When M. C. Escher talked about his work, he mentioned that at a certain point controlling the artistic technique became a secondary mission. The ideas behind the works were the main goal.

By presenting these works to the eyes of science, I am letting the ideas behind the paintings take center stage, as they deserve; the technique used is merely a tool to for expressing those ideas.